Professor Darrell Jodock, who is the Drell and Adeline Bernhardson Distinguished Professor in Religion at Gustavus Adolphus College, will be one of the featured speakers at the AAIF 2012 Biennial Conference at Collegeville, MN Darrell Jodock, who is the Bernhardson Distinguished Professor of Religion at Gustavus Adolphus College, has been appointed to chair the ELCA consultative panel on Lutheran Jewish relations for a three-year term beginning April 1.

The panel, formed in the early 1990s, formulated the “Declaration of the Evangelical Lutheran Church in America to the Jewish Community,” which was adopted by the ELCA in 1994. That declaration rejected the anti-Judaic statements made by Luther late in his life. The panel produced “Guidelines for Lutheran-Jewish Relations” in 1998 and “Talking Points: Topics in Christian-Jewish Relations” in 2002.

Currently, it participates in an ongoing dialogue with Reform Jews, is involved in a joint effort by major Jewish organizations and the National Council of Churches to foster peace in the Middle East, and is producing a book to update church leaders about Jewish-Christian dialogue.

Dr. Jodock has served on the panel since 2001 and as a professor at Gustavus since 1999.

Professor Jodock teaches in the area of Lutheran Studies. His teaching interests include Lutheran Studies, Christian-Jewish Relations, History of Christian Thought, and Nineteenth Century Theology. Dr. Jodock is the first holder of the Drell and Adeline Bernhardson Distinguished Professor of Religion. He is the recipient of the Danforth Graduate Fellowship and was elected to membership in Phi Beta Kappa. He has also received the Wallenberg Tribute Award for interfaith activity.

He has contributed articles to Journal of the American Academy of Religion, Interpretation, Scottish Journal of Theology, Word and World, Dialog, The Christian Century, Downside Review, Currents in Theology and Mission, Lutheran Partners, Intersections, and The Lutheran.

Dr. Jodock came to Gustavus from Muhlenberg College (Allentown, PA). There he was a Professor of Religion and from 1978 to 1992 the Head of Muhlenberg’s Religion Department. Prior to 1978, Jodock taught for seven years at Luther Theological Seminary (St. Paul, MN) and served for two years as a parish pastor on the staff of Grace Lutheran Church in Washington, DC. At Gustavus since 1999.

Dr. Jodock’s book: ”Catholicism Contending with Modernity: Roman Catholic Modernism and Anti- Modernism in Historical Context” is a case study in the ongoing struggle of Christianity to define its relationship to modernity, examining representative Roman Catholic Modernists and anti-Modernists, exploring their relationship to their own historical context.

Its aim is to counteract the tendency to lift the proposals made by the Modernists out of their setting and define them as a coherent, timeless philosophical/theological outlook, which should be avoided. The book seeks to correct the proclivity of some contemporary proponents of Modernist ideas to de-contextualize those ideas and recommend their endorsement without a critical reconsideration of historical changes. It sketches the nineteenth-century background of the Modernist crisis, identifying the problems that the church was facing at the beginning of the twentieth century; and offers a fresh perspective on the Modernist crisis, a perspective arising from the pioneering work undertaken by the Roman Catholic Modernism Working Group of the American Academy of Religion.  Dr. Jodock’s book: ”Catholicism Contending with Modernity: Roman Catholic Modernism and Anti- Modernism in Historical Context” published by Cambridge University Press, Jun 22, 2000 is readily available.

Dr. Jodock, as a Professor of Religion at Gustavus Adolphus College, has taught: Holocaust and Theology;  Luther and His Legacy; God Today; 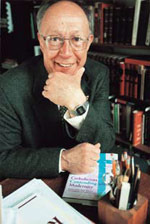 The first endowed chair in Lutheran Studies at Gustavus (and the first at any college related to the Lutheran church) was established in 1996 by Drell and Adeline Bernhardson. The Bernhardsons, parents of four Gustavus graduates, received the Greater Gustavus Award in 1997.

Darrell Jodock, the initial Bernhardson Professor, is a highly regarded scholar in the field of Lutheran studies and has a special interest in Lutheran higher education. Jodock considers himself to be an historical theologian and is interested in shaping the thinking of the Church today. His primary areas of teaching and research focus on Lutheran studies, religion in American culture, the Holocaust, the history of Christian thought, and Jewish-Christian relations.

Jodock loves to teach. He seeks to awaken an informed appreciation for religion, for Christianity in its various forms, and for the Christian heritage. He challenges students to think more deeply about their own tradition while at the same time learning to appreciate other denominations and other religions.

Author of numerous books and publications, Jodock earned a B.A. from St. Olaf, a B.D. from Luther Theological Seminary, and a Ph.D. from Yale.

Jodock served on the planning committee that developed the successful proposal to the Lilly Endowment to create the Center for Vocational Reflection at the College and played an important role in writing the $2 million request. He continues to serve the Center as a member of its Advisory Board.

“A college endows what is essential. By endowing a chair in Lutheran Studies, Gustavus has affirmed the centrality of its relation to the Lutheran tradition and the Lutheran community of faith.”

Education
Ph.D., Yale University (1969); B.D., Luther Theological Seminary (1966); and B.A., St. Olaf College (1962).
Tell us about life before Gustavus
As soon as I was done with graduate school, I was invited to teach in the Church History Department at Luther Seminary in St. Paul. I was there for four years, served as a parish pastor at Grace Lutheran Church in Washington, D.C., and then taught again at Luther Seminary from 1975 to 1978. In 1978 I was appointed to head the Religion Department at Muhlenberg College in Allentown, PA. I served as head of the department until 1993 and taught there until coming to Gustavus in 1999. While at Muhlenberg I founded an Institute for Jewish-Christian Understanding.
What are your professional/research interests and significant professional projects or accomplishments?
I currently devote a lot of attention to exploring and articulating the basis in Lutheran theology for church-related colleges and for social service institutions. I have given and continue to give a number of speeches on that subject. My second main endeavor is Lutheran-Jewish relations. I serve as the chair of the ELCA Consultative Panel on Lutheran-Jewish Relations, serve on a task force of Protestants and Jews working for peace between Israelis and Palestinians, and am finishing editing and co-authoring a book on Jewish-Christian relations. My third area is 19th century theology. In addition to being active in the 19th Century Theology Group of the American Academy of Religion, I am working on an article and a book in that area. A fourth area of interest is connecting the work of theologians and other aspects of the ELCA. I serve as chair of the ELCA Association of Teaching Theologians and serve on the Board of the Pastor-to-Pastor project (Gustavus Adolphus and SW MN Synod). Finally, I am interested in ecumenism. I serve as Vice Chair of the Board of the Institute for Ecumenical and Cultural Research in Collegeville, MN.
What do you learn from teaching students?
It is fun to teach college students because they move so quickly from just beginning to study a topic to significant involvement in that area of investigation. Secondly, teaching provides a direct benefit in that it provides a context where feedback is possible as I try to state something clearly. If I am unable to explain the idea to college students, then I need to do some more work on it before trying again. Thirdly, students often ask wonderful questions. They push me to explore connections I may not have thought about before.
What do you value most about teaching at Gustavus?
I value the church-related, liberal arts setting, where the community as a whole
is dedicated to exploring those ideas and actions that serve the larger community. I value the students who care enough to be involved in their learning and in service to the larger community. I value my colleagues on the faculty and staff, who make life enjoyable and interesting.
What do you value about non-classroom interaction with students?
It is a privilege to be invited into conversation about important matters, such as students’ sense of vocation, their questions about religion, their topics of study, and their plans for the future.
What are your hobbies?
I enjoy reading about things beyond my own discipline – whether novels, or an analysis of current events, or a discussion of woodworking, or a journal about farming. I enjoy any chance I have to work outside, especially if it involves working on a farm. I enjoy attending gatherings of antique tractors and do some collecting of toy farm equipment.
Describe a community service project you’ve worked on with students or about your own community service or community involvement (on campus or in the larger community).
I have been active in local politics, attending local and district conventions. I serve on the adult education committee of Trinity Lutheran Church and do some teaching there. I have been active in a number of ways in the work of Lutheran World Relief. On campus, I serve on the Board of the Center for Vocational Reflection and serve on the Church Leadership Committee.
What is your favorite Gustavus tradition or one aspect of the community that you like to highlight when describing Gustavus to others?
I like to highlight the attention to vocation, the significant numbers of students who study overseas, the large number involved in music, and the large number who opt for a year of service after graduation. My two favorite Gustavus traditions are the Nobel Conference and Christmas in Christ Chapel.
http://admission.gustavus.edu/admissions/spotlight/spotlight.asp?iSpotID=302

Not necessarily, says Darrell Jodock of  Gustavus Adolphus College in St. Peter, Minnesota. “I think churches have fallen short on modeling [vocation] as a part of adult life,” Jodock says.

Lutherans and others, he adds, “have a great deal of difficulty articulating how their faith manifests itself in their calling six days a week.”

“Discerning vocation casts matters into relief sharper than sunrise on a wilderness lake.”

Dr. Darrell Jodock, retiring after teaching Lutheran studies at Gustavus since 1999, calls vocation there “a sense of oneself as nested in a larger community — and then it becomes an ethical priority to serve that community.”

Vocation crosses lines of faith. Jodock knows a Buddhist English teacher and a Muslim administrator at Gustavus who, he says, agree with Luther’s idea of everyone called to serve God.

Training in Lutheran vocation means that faculty readily add the idea to courses: in biology, addressing pollution; in a Holocaust course, preventing more genocide. After a decade of discussing vocation at Gustavus, when the subject arises, says Jodock, “everyone has a glimmer of recognition.”

Vocation awareness has made a difference for alums. Jodock describes the young woman who “broke the script” set by teachers and family and went to Africa with the Peace Corps. Another traveled to India as part of her studies and after graduation returned to India to work — only to realize that a Westerner in India might be more effective elsewhere.

Now, back in the United States, she explains Lutheran World Relief needs to congregations.

Jodock tells another story. Heads up. This one is subtle:

Still another young woman from Gustavus realized that she had always measured her own self-worth against her school and sports achievements. The insight came in South America, where she had traveled for what turned out to be humble work — tending kids in an after-school program.

There, says Jodock, the young woman realized children and their families adored her — not for her brains or muscle, but just for being there. As a result, says Jodock, this woman, not a Lutheran, began to “ponder just what grace might mean.” All of us, Lutheran or not, might well ponder with her.

And that’s why vocation matters.

For more information … More information about this year’s Vocation of a Lutheran College conference at Augsburg College in Minneapolis is available at www.augsburg.edu/acfl.